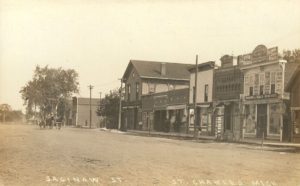 Patrick Trainer moved to St. Charles, Michigan sometime between 1897 (the birth of my grandmother Eliza in Jackson), and 1899 (birth of my great-uncle John W. Traynor) in St. Charles, Michigan.  Then Frank Trainer/Traynor moved there between 1901 (birth of Carl Moody Trainer in Jackson), and 1902.  Opal Susan was born in January of 1903, so we can probably bank on it being in 1902.  Sometime prior to 1910, Patrick’s family moved from Michigan to Fulton County, Illinois.  As you might figure, he was following the coal mining industry.  There began the Hanna City part of Traynor family history.  I believe that about this same time Frank moved from St.… Read the rest